The Art of Clyfford Still Re-emerges

Self-Portrait, 1940
Clyfford Still (1904-80) was a major figure of the Abstract Expressionist movement whose name was once frequently mentioned along with revered artists like Jackson Pollock and Mark Rothko.

PH-77, 1936
When he died, Still's paintings, by decree of his will, were sealed away until a "permanent quarters" devoted to his work — and only his — could be established.

PH-313, 1942
More than a dozen art institutions tried and failed, before Denver, to persuade Still's widow Patricia to house the work.

1949 No. 1 (PH-385), 1949
Toward the end of his lifetime, Still enjoyed great prominence. In 1979, New York City's Metropolitan Museum of Art presented a hugely popular exhibition of his work that was the biggest presentation the institution had ever given to a living artist.

大きな波のうねりが海岸に押し寄せた
The high waves surged against [upon] the shore.
見わたす限りなだらかな丘のうねりが続いている
The gently undulating hills stretch as far as the eye can see.

A Suspension of Willful Disbelief 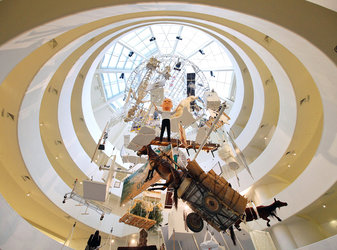 A Suspension of Willful Disbelief

A distinction of the Guggenheim’s retrospective of the Italian artist Maurizio Cattelan is that the pieces — 128 in all — hang from near the top of the museum’s rotunda. Etymology
From Latin rotundus (round), from rota (wheel). Ultimately from the Indo-European root ret- (to run or to roll), which is also the source of rodeo, rotunda, rotate, rotary, roulette, and orotund.

Since 1975, the International Architecture Biennale in Sao Paulo (BIA) has been a world renowned forum for modern architectural artistry. This year's show, which runs in the Brazilian metropolis from November 1 through December 4, bears the motto "Architecture for All - Building Citizenship."

Architecture and city planning are "partners of society and lead to the creation of communities," according to Brazilian architect Valter Caldana, the curator of this year's Biennale.

German is one of more than 20 countries participating, and its entry to the Biennale in Sao Paulo runs with the slogan "Baukultur: Made in Germany." An expert jury chose 20 projects representing modern environments and sustainable buildings.

"Baukultur: Made in Germany" is as much about buildings created in a Germany as it is about German architectural developments and architectural engineering firms working on projects abroad.

The German term for the built environment, "Baukultur," has found its way into many other languages. According to the Federal Chamber of German Architects (BAK), the term applies not only to finished constructions but to the entire planning process which in Germany is marked by a high level of transparency and public consultation. That is particularly the case for public buildings, whose planning involves open dialogue with local citizens as standard.

"German architects do not conceive of themselves as the trustees of house owners, but view the 'Baukultur' as an obligation," reads the foreword to the German entry at the Biennale in Sao Paulo written by the BAK. "The question of the quality of German architecture and architectural engineering is inseparably tied to the issue of 'sustainable building.' Sustainability encompasses economic efficiency, environmental friendliness and the saving of resources to plan and build in harmony with the given social and cultural landscape."

During the selection process for Sao Paulo, the BAK prioritized sustainable buildings alongside projects which encompass innovative solutions to special landscape and climate challenges. The aim was to "meet the demands of a dynamically changing world and find solutions that make our cities and landscapes liveable."

The concrete jungle of Sao Paulo hosts the event One project which embodies these ideals is the IBA Dock Hamburg, which is being presented in Sao Paulo. It demonstrates how a building can create its own supply of renewable energy: A photovoltaic panel and hydro-power from the Elbe River deliver electricity and heating is generated through a hydro-extractor.

Through creative insight and the application of environmentally friendly technology and construction techniques, the Cape Town Stadium in Cape Town, South Africa is another example of successful dialogue between nature and society.

Then there is the Albertinum in Dresden, an architectural linking of epochs. The back of the Baroque, listed building which houses Dresden's state art collection is bridged over by a two-storey roof creating space for a flood-proof storage depot.

Other examples of "Baukultur made in Germany" which take into consideration societal, conservational and ecological concerns are the student housing project in the Olympic Village in Munich and the extension to German National Library in Leipzig, which does its bit for climate change by garnering the majority of its energy supply from geothermal ground heat.